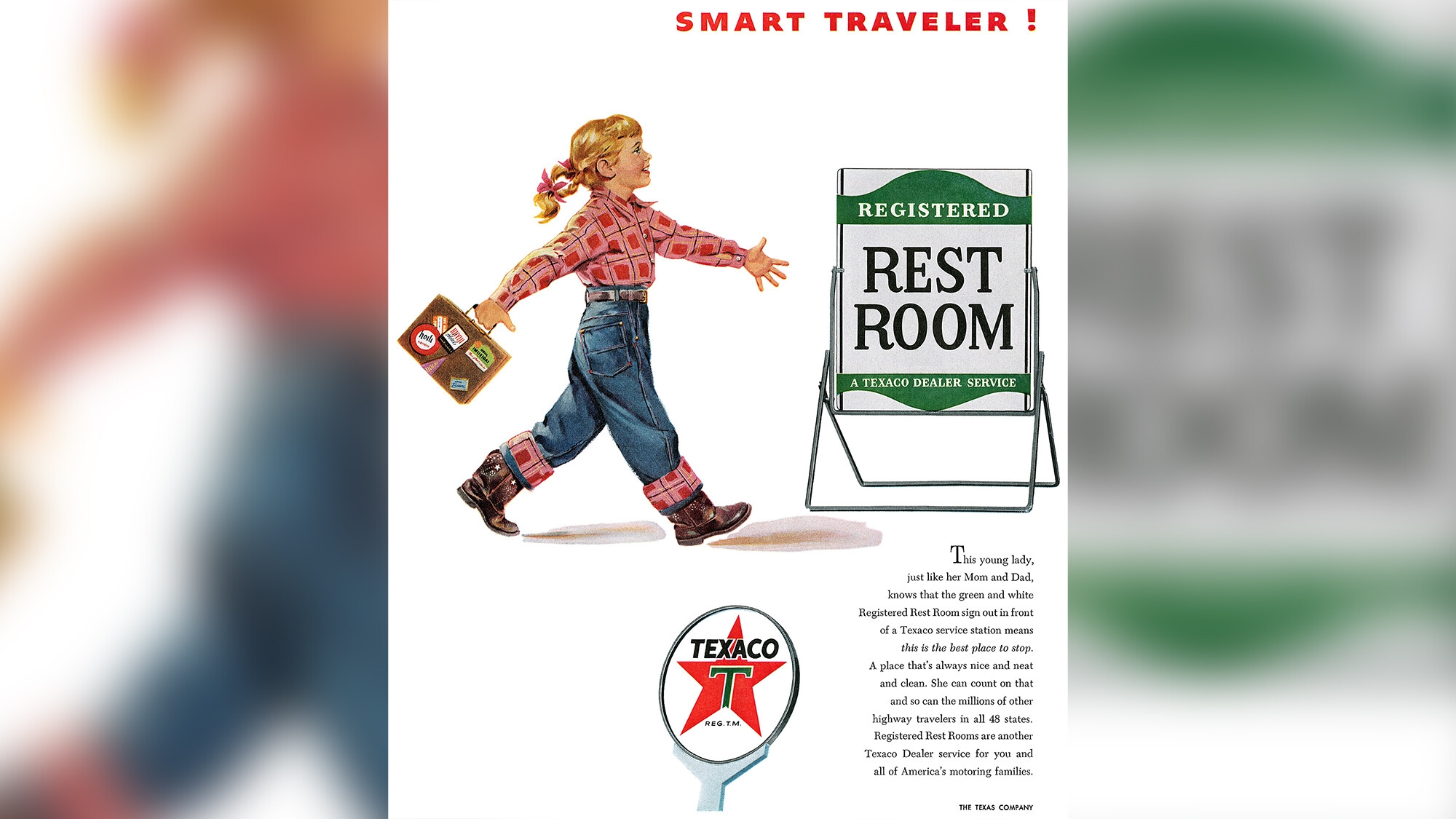 Spotless bathrooms were once a crucial selling point for gas stations.

Gas station toilets are the last place most people want to stop to do their business.

But this has not always been the case. Spotless bathrooms were once a crucial selling point for gas stations.

In fact, gas station advertisements for oil giants in the early and mid-20th century assured travelers that their bathrooms were as clean as those in drivers’ homes.

Texaco, Gulf, Shell, Sunoco, Esso, Phillips and other companies plastered roadside billboards, ran color ads in national magazines and created catchy slogans such as “Registered Rest Rooms” and ” Clean Restroom Crusade” to showcase their facilities. Companies have fought to outdo each other’s bathrooms, with some companies even sending “White Patrol” and “Highway Hostess” teams to inspect and certify them.

Companies have tried to make their bathrooms feel more like home in response to the growing number of women driving and traveling across the country. In 1928, women bought half the fuel at gas stations that year, according to an industry journal.

Oil companies thought women would decide where to stop with their families, even if they weren’t driving, said University of Miami historian Susan Spellman, who wrote her thesis on women’s influence. on the development of service stations.

“She will remember the dirty rest room and avoid the station on her next trip,” read a 1938 article in the National Petroleum News trade journal with the headline “Women Avoid Dirty Stations.”

At the same time, corporate efforts excluded black women and men, who were not allowed to use these restrooms in the segregated South and were not a priority for these northern companies until the 1960s. 1950 and 1960.

The development of the interstate highway system and the rise of self-service marked the end of the golden age of clean restrooms at gas stations.

At the turn of the 20th century, motorists drove to a forge, hardware store or drug store to buy a can of gasoline.

But the mass adoption of cars, the development of roads, and the introduction of the manual gas pump around 1910 led to a proliferation of curbside gas stations.

In 1920, there were 15,000 gas stations in the United States. Many of these stations, however, were in disrepair and their designs and services were an afterthought.

As competition for customers increased in the 1920s and 1930s, companies found they needed ways to separate their stations beyond the indistinguishable brand of gasoline they were selling. They started to focus on service and amenities.

They sought to attract customers by constructing welcoming cottage-style buildings, adding courteous, uniformed station attendants, and offering a range of services and perks such as oil checks and windshield wiping. broken.

At the time, the public worried about the spread of venereal disease in public establishments. “Stations must be clean to overcome growing public fears of syphilis,” National Petroleum News warned in 1938.

Better bathrooms were intended to allay these fears, particularly to help attract women.

Women have consistently rated a clean restroom as their top priority when frequenting a gas station, according to trade journal articles during the time period Spellman uncovered.

The layout of the bathroom respected the gender norms of the time. Unlike today, where all patrons generally must enter a gas station to use the bathroom, typical women’s toilets of the time were built at the back of the building or on the side to give women more privacy. The men’s room, on the other hand, was located indoors near the sales area.

Gender roles at the time dictated that women were responsible for everything in the home, including the bathroom, Spellman said.

The companies believed that if a woman had a good experience in one of their restrooms, she would tell her friends that the restroom was safe for them and their children.

The companies created a slew of campaigns in national and women’s magazines, on billboards, and through signs posted outside gas stations in the 1930s and 1940s to brighten up their clean bathrooms.

Texaco created a “Registered Rest Room” program in 1938 for its thousands of stations in all 48 states.

The company sent fleets of inspectors in white cars – called the “White Patrol” – to make sure the toilets were up to scratch. Stations that met a set of standards were able to display white and green “Registered Rest Room” signs outside their stops, signaling to customers that the bathrooms were safe to use.

Read another Texaco advertisement explicitly targeting women: “Our ‘Powder Room’ on every road.”

“You’re in luck, Betty,” a mother tells her daughter in the ad. “I remember when it was hard to find clean, attractive restrooms like this.”

Shell responded with its “White Cross of Cleanliness” advertising campaign in partnership with Good Housekeeping Magazine. Shell stations put up signs warning customers that toilets were being kept “Home Clean” to magazine standards.

Gas stations continued to prominently advertise their bathroom conditions over the following decades. Texaco in the 1960s, for example, ran television commercials highlighting its bathrooms. A “clean and tidy” toilet is “something a woman really appreciates”, says the narrator.

Images of mothers and daughters, nurses, white gloves and other themes were intended to reassure white women, in particular, about gas station restroom standards. Black drivers have been excluded from corporate strategies.

“It’s a call to a domestic world of white women,” said Mia Bay, a historian at the University of Pennsylvania and author of “Traveling Black: A Story of Race and Resistance.” Gas station advertising at the time attempted to convey “safe spaces for white women.”

In the Jim Crow South, segregation laws required separate facilities for blacks and whites. And there were few separate “colorful toilets” at major gas stations, Bay said. She added that black drivers in the South were usually forced to seek out black-owned gas stations, which were often advertised in travel books for black motorists – or to drive around the back or exterior of large company service stations.

Hold it at the gas station

So how did gas stations go from so prominently advertising their clean bathrooms to the dismal reputation they have today? (Here’s a helpful reminder from BuzzFeed on why you might just want to hold it off the next time you need to go to a gas station.)

There are several reasons, say historians of gas stations and public facilities.

The development of the interstate highway system and rest areas along the highway has reduced the importance of gas station restrooms, said Matt Anderson, curator of transportation at the Henry Ford Museum of Michigan. “It would be quicker to duck down at a rest area than to get off the freeway and find a gas station.”

Gas stations stopped directly featuring restrooms in their ad campaigns, and by the late 1960s, “station restrooms were beginning to get a bad rap,” Anderson said.

In large cities, many gas station owners have decided that the cost and effort of maintaining their bathrooms is no longer worth it, especially since public bathrooms in the city ​​and state closed and more people flocked to gas stations, said Bryant Simon, a historian. at Temple University who is working on a book on the history of public restrooms in the United States.

“Gas stations were pissed that the government was outsourcing the bathrooms to them,” Simon said. “They see it as a drain on their results.”

As resorts focused less on maintenance, bathrooms deteriorated and customers treated them worse, Simon said, describing it as a “vicious spiral”.

Drivers were more focused on finding the cheapest gas — not the station with the cleanest bathroom or the best service — and many were willing to sacrifice a clean restroom if it meant saving a few cents per gallon.

“Gas has become more transactional with self-serve,” Simon said. “Service and amenities are left behind.

However, a handful of gas station chains today still borrow tactics from the earlier clean bathroom era to attract customers.

Kwik Trip in the Midwest posts a “Clean Restroom Promise” sign in all of its bathrooms with CEO Don Zietlow’s name and a complaints hotline number. Zietlow personally receives and answers every call.

And Buc-ee’s in Texas consistently ranks among the top-rated bathrooms in the gas station industry. The company uses billboards along the highway to advertise its facilities, including “Top Two Reasons to Stop at Buc-ee: Number 1 and Number 2” and “Rest Rooms have to pee to believe”.