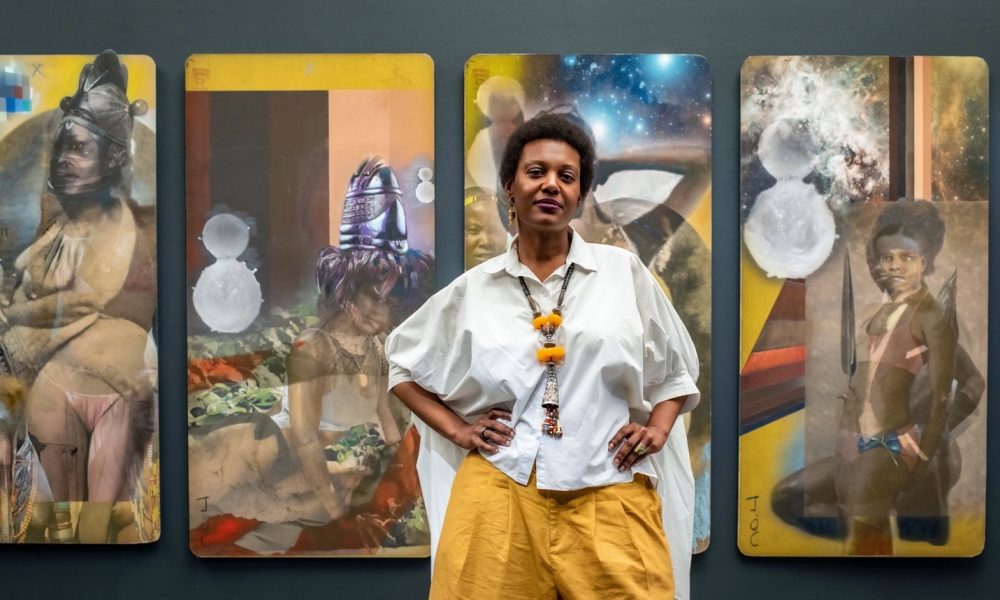 
More than 20 Californian artists have partnered with the state for the “Your Actions Save Lives” campaign. The effort was created to elevate and celebrate the resilience of communities and encourage safe practices that stop the spread of COVID-19 as Governor Gavin Newsom plans to reopen the state on June 15.

The 14 original art projects included in the campaign range from murals, interactive exhibits and live performances by artists based in communities heavily affected by COVID-19, including Oakland, Sacramento, Stockton and San Diego.

“The arts have the opportunity to be uplifting and to heal your emotions,” said Jessica Wimbley, an African-American digital artist who collaborated with the State for an Oak Park billboard advertisement in Sacramento and a digital art exhibit at Arden Fair Mall in Sacramento.

“It’s a breath of fresh air to work on this campaign. There has been so much negativity and division in the world that it weighs on the mind, ”Wimbley said.

“It was a transformation to work on this project,” she added.

The state partnered with the Center at Sierra Health Foundation in Sacramento for the project that uses the power of art to communicate the importance of health awareness in addition to getting vaccinated.

“These accomplished artists tap into their culture and creativity to share empowering messages with communities that have been hit hard by COVID-19,” said Chet P. Hewitt, President and CEO of the Sierra Health Foundation.

“Art has incredible power and we believe these works will spark important conversations, connections and inspiration statewide,” he said.

Four women artists, including Wimbley, used the project to tap into their respective cultures to create powerful visual works of art that empower and inform their diverse communities.

Sunroop Kaur, a classical artist, whose Spring mural is located in Stockton was inspired by her Punjabi-Sikh heritage. In San Diego, Tatiana Ortiz-Rubio’s “Stop the Spread” mural pays homage to her Mexican heritage.

In addition to the arts campaign, Newsom recently announced a $ 116.5 million incentive program that will reward Californians for their vaccinations. The state has allocated $ 100 million in grocery gift cards worth $ 50 each for the next two million people who will get vaccinated.

The remaining $ 16.5 million will be awarded as cash prizes to people who have been vaccinated statewide. More than 17 million people in California are fully vaccinated, representing about 44% of the state’s population.

The incentive program aims to encourage everyone in California to get vaccinated with the goal of reopening the state by mid-June of this year.

State officials say they are determined to fully reopen California schools and businesses in a bid to help the economy recover.

Black and brown families continue to experience the economic shock caused by COVID-19 despite the state’s efforts to educate the community to minimize hardship in their respective communities.

The artists featured in the state’s “Your Actions Save Lives” campaign hope to communicate messages of unity and solidarity through art influenced by their different cultures.

Four local artists celebrate their legacies and draw inspiration from their multicultural communities.

Miki’s interactive art installation “Caring Animals, Dangerous Animals” was inspired by the idea of ​​a treasure hunt in Oakland’s Chinatown. The pandemic has forced people to stay indoors, but the public art installation encourages people to explore different stores and restaurants while admiring the art.

The artwork was inspired by the shape-shifting animals of Japanese mythology.

“I wanted it to be positive and uplifting because when things are dark and difficult, we have to have more positive images,” Miki said.

The current reality of the pandemic is “so grim and difficult that we need images that give us the opportunity to envision something positive,” she said.

In Japanese culture, the tiger is a majestic animal that is not afraid, she says. The cultural message of the work of art echoes notions of harshness.

“Resilience is our strength,” and the caring animals featured in the art are meant to encourage people to “respect each other and have empathy to get through this difficult time together,” Miki said.

Recent incidents of violence against Asians have fueled racial tensions in America, in addition to violence against African Americans across the country. Miki aspires to use her works to dispel the stigma associated with COVID-19 on the Asian community.

“We have to have this dialogue so that I can present my culture in a way that it becomes familiar and it is not something that they are afraid of because they do not know it,” Miki said.

Artistic performances and visual presentations created by all the artists of the “Your Actions Save Lives” campaign have been on display since April and will run until June of this year.

Kaur, an artist of South Asian descent, aims to decolonize classical art by using people of color as the center of attention in her paintings.

The large Sikh immigrant population from Punjab to Stockton is a major influence in Kaur’s work. Kaur intends to use people of color as the focal point of his “Spring” mural located at JMP Restaurant Supply.

“This mural is a visual celebration of my community and its resilience not only to survive in a foreign land, but also to thrive,” Kaur said.

The mural is inspired by the idea that “the decentering of whiteness in my work using people of color is my primary fitter,” she said.

“The appropriation of the canons of Western classical art as a means of decolonizing my own body and my culture,” she said.

The body language of the characters symbolizes “the universal desire and desire we feel for each other, but also the recognition that we need to protect our loved ones,” Kaur said.

The mural also includes floral designs in pastel colors in reference to spring which represents the re-emergence of life after the pandemic. The mural features royal blue arches as well as pink and malachite with historic pastel pigments that are part of Persian culture.

The Oak Park billboard, part of a state-sponsored advertising campaign, features Wimbley’s husband as a model. The portrayal of dark-skinned black men is important when there have been numerous incidents of death in the media.

The billboard reinforces, “This notion of a living black man,” Wimbley said.

“It’s really important to humanize the portrayal of black people in the media. And focus on producing an agency and empowering, ”she said.

Wimbley’s masking series was inspired by the masquerade tradition which is celebrated in many cultures across Africa. The artistic series features a photo of a face with a mask modeled by her husband and a multimedia image with a mask reflecting different visuals.

“Storytelling communicates important events within the community, I was reflecting on wearing a mask in masquerade culture and the transformative nature of putting on a mask and wearing one,” Wimbley said.

Wimbley also wanted to humanize blacks and brunettes who have been disproportionately affected by COVID-19. The added stress of police brutality leading to the deaths of African Americans across the country also inspired Wimbley to show that black people have autonomy in their own lives.

Through her art, Wimbley said she wanted black people “to be in a place of empowerment, as opposed to a space of trauma.”

“We are part of an interconnected story and each other’s story. We have the power to act in how we move forward and we can write, claim and develop what this next phase looks like, ”Wimbley said.

The symbolism of the images featured on the Oak Park billboard and digital signage at Arden Fair Mall highlight different codes that have inspired social justice movements across the country. On the display panel, the model wears a mask with coded vaccination-promoting designs and several rings, including one with Harriet Tubman.

In his “Stop the Spread” mural located at Bread & Salt Gallery in Chicano Park,

Mexican-American visual artist Ortiz-Rubio used the image of a Latina woman to raise awareness of COVID-19 safety precautions in her community.

According to national data, Latinos make up about 30% of San Diego’s population. They have been disproportionately affected by COVID-19 as a disproportionate number are essential workers or undocumented people.

“It’s really a message to anyone in the world because a pandemic has touched us all. But it hasn’t touched us in the same way,” Ortiz-Rubio said.

“In the United States, minorities have been affected because of their race and economic status,” she said.

Muralism was a social movement that helped foster systematic change in Mexico. Ortiz-Rubio said the Black Lives Movement also inspired her to challenge racism and inequality through her work.

“It speaks to everyone, and the fact that it’s a Latin American woman talking to anyone is also important because the generally generalized images are of a white person,” she said.

Being a woman is an integral part of Ortiz-Rubio’s experience when creating the mural. She remembered young girls and their mothers seeing her paint the mural from their backyards, which reaffirmed her desire to use a Latina as the centerpiece of her mural.

“It will be a message that eliminates this stigma,” she said.

The visual artist said she wants Latin Americans to be represented and celebrated in her art, especially when they are the target audience.

Scare people can work, but it comes at a price